As we reported last week, Australian travellers can now book direct flights from Brisbane to Chicago and San Francisco.

At the time of writing, Qantas didn’t appear to have released Classic Reward seats for either of those routes. However, we’re now seeing wide-open availability of business and premium economy award seats on the Brisbane to San Francisco route.

At the time of writing, there is availability of 4 x economy, 4 x premium economy and 2 x business class seats on most days the direct Brisbane to San Francisco flight runs, from February 2020.

We’ve searched for this award space across Bronze, Silver and Platinum frequent flyer accounts, and the seats are showing up for all membership tiers (though higher tiers of membership may see availability slightly further out).

What will an award seat on this route cost?

If you’re looking to book in one (or more) of these award seats, don’t delay! Not only will they go like hotcakes, but Classic Reward redemptions in premium cabins are set to cost more from mid-September 2019.

Will you be looking to snap up an award seat between Brisbane and San Francisco? Qantas to launch flights between Sydney and Orange 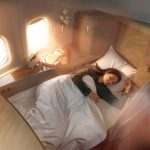 Cathay Pacific: A Sense of Harmony