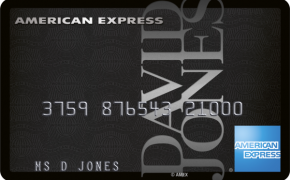 When you apply, are are approved and spend $750 at locations excluding David Jones on your new card within the first three months. Available to new David Jones American Express Card Members only.

Enjoy complimentary gift wrapping and delivery when you shop at David Jones with your card. Plus, access David Jones Payment Plans and get exclusive invites to fashion events

Earn points on every dollar you spend

Plus, there’s complimentary gift wrapping and free standard delivery when you shop online at David Jones – right in time for Christmas.

Even if you’re not a devoted David Jones shopper, there’s lots to love about this card.

The David Jones Amex has one of the best earn rates in the market for grocery and fuel spend. You’ll earn 3 Membership Reward Points or 1.5 Qantas Points per $1 spend at major supermarkets and petrol stations (with no points cap) – helping you to rack up the rewards year-round.

All this comes with a very low $99 annual fee.

To receive the 15,000 bonus Membership Reward Points or 7,500 Qantas Points, you need to apply, be approved and are approved and spend $750 at locations excluding David Jones on your new card within the first three months. Available to new David Jones American Express Card Members only.

Apply now via the secure American Express website. Or, read on to find out more about the benefits of this popular card.

With the David Jones American Express Card, you can opt into either American Express Membership Reward Points or Qantas Frequent Flyer when you complete your card application. Your Points will be automatically converted to your choice of rewards program.

When you choose the Membership Reward Points program, you’ll unlock the ability to transfer to a range of airline and hotel programs.

Prefer to shop up a storm? Put your Membership Reward Points towards David Jones gift cards. You could also redeem for spend with Ticketmaster, American Express Travel Online or in gift cards for other retailers.

Qantas lovers can instead opt to earn directly into Qantas Frequent Flyer, with the sign-on bonus equivalent to 7,500 Qantas Points.

Redeem your Qantas Points for Classic Flight Rewards with Qantas or airline partners. Alternatively, shop for merchandise and gift cards through the Qantas Store.

Earn points on every dollar you spend

Supercharge your points balance fast with an earn rate of 3 Membership Reward Points or 1.5 Qantas Points per $1 spend at major supermarkets and petrol stations. This is one of the highest earn rates on groceries and fuel in Australia.

Points earning rates are provided in the table below:

Whichever way you look at it, the David Jones Amex provides an exceptional earning rate for supermarket and fuel spending. Devoted department store shoppers win too, with a generous earn rate on spend at David Jones, both instore and online.

Best of all, there’s never a cap on how many points you can earn with the David Jones American Express Card – regardless of how much you spend each month or year.

When you shop with your David Jones American Express Card, you’ll enjoy a range of exclusive benefits and perks. These are designed to save you money and reward you when you spend.

Complimentary standard delivery to Australian addresses, for items purchased both in-store and online at David Jones (excludes gift cards, hampers, fresh food, wine club, gift registry and large items). Standard Delivery normally costs $10 for purchases under $100, so this benefit can save you money over the course of the year.

Сomplimentary gift wrapping available whenever you use your card instore or online at David Jones. This can be an extremely handy benefit to use at Christmas time or for birthdays!

Up to Four Years Interest-Free with no deposit when you spend $500 or more on homewares, furniture, bedding or electrical items at David Jones

Fashion Pay Later Option for purchases made instore on your card

Save with a range of other benefits

Your David Jones American Express Card unlocks even more value with a range of other perks. These include:

You can access the Key Fact Sheet for this card here

The David Jones Amex Card comes with a very competitive annual fee of $99. The minimum reportable income to apply is $40,000 per annum.

To be eligible, you must not currently hold or have held any other David Jones Card product issued by American Express Australia in the preceding 18-month period. This excludes supplementary cardholder on someone else’s account.

You must be an Australian citizen or permanent resident or hold a long term visa. Long term means 12 months or more and does not include a student visa.