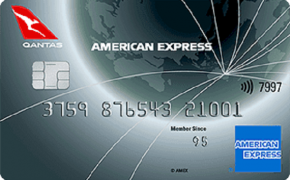 Apply online by 27 October 2021, be approved and spend $3k on your new Card within the first 3 months (new card members only)

To spend on Qantas flights for yourself or someone else. Awarded each year, when you purchase an eligible Qantas product or service with your Card (T&Cs apply)

Up to 40,000 extra Qantas Points with Shop Small

Simply save the offer to your eligible Card and get 3 extra Qantas Points per $1 spent, in-store or online at participating Shop Small businesses by 31 March 2022, up to a maximum of 40,000 extra Points. Exclusions apply

Get rewarded with one of the most generous offers we've seen for this card.

Are you in the market for a Qantas credit card that's packed with perks – plus a serious serve of bonus points to boot?

For a limited time, score a huge 110,000 bonus Qantas Points with the Qantas American Express Ultimate Card. Additionally, get $200 back – effectively reducing the first-year annual fee to just $250.

There's also a $450 Qantas Travel Credit awarded each membership year. Plus, get 3 extra Qantas Points per $1 spent up to a maximum of 40,000 extra Points with Amex Shop Small (T&Cs apply).

Or, read on to discover more about our favourite Qantas Points earning Amex card.

The 110,000 bonus Qantas Points and $200 Back will be awarded to the eligible Card Member’s account 8-10 weeks after the spend criteria has been met.

With much of our travel grounded right now, it’s natural to wonder how you might spend a stash of Qantas Points.

However, with 110,000 Qantas Points, you could get travelling to a number of destinations on the Qantas domestic network (excluding applicable taxes/fees). And if flying doesn’t appeal right now, there are also plenty of ways you could look to use the bonus points on the ground!

You could also use your Qantas Points to travel almost anywhere on the Qantas international network, once global borders open back up.

Qantas Points don’t expire so long as you earn or redeem at least one Qantas Frequent Flyer point every 18 months. So, while international travel is off the cards at present, you could look to build up your Qantas Points balance now and save it for future opportunities.

Get up to 40,000 additional bonus Qantas Points with Shop Small

With the Amex Shop Small promotion, you can earn up to 40,000 extra Qantas Points. To access this offer, simply save it to your Card when you receive it.

You’ll receive 3 extra Qantas Points per $1 spent, in-store or online at participating Shop Small businesses by 31 March 2022, up to a maximum of 40,000 extra Points. Exclusions apply.

Get $450 to spend on Qantas flights each year

The Qantas American Express Ultimate Card will cost you $450 to hold each year, but that number is fully matched by travel credit to spend on flights.

The Qantas Travel Credit can be used towards eligible international or domestic Qantas flights when you book and pay online at American Express Travel. Eligible flights are standard Qantas flights with a QF flight number, so there are plenty of routes to choose from.

The Qantas Travel Credit is very flexible, as it doesn’t have to be used for yourself – you can use it to book and pay for flights for others if you choose.

Your Qantas Club lounge invitations are digitally credited to your account after your first Card spend each year in Australia on selected Qantas products and services.

Once your Qantas Club lounge passes have been activated, you’ll receive an email from Qantas and your two digital lounge passes will be attached to your Qantas Frequent Flyer account. The passes are valid for 12 months from the date of issue.

Earn piles of Qantas Points when you spend

1.25 Qantas Points per dollar is one of the highest Qantas Points earn rates on everyday spend in Australia, and it makes this Card an attractive one to keep for the long term.

Best of all, there’s no cap on how many points you can earn – regardless of how much you spend per month or each year.

If you’ve been thinking about getting a Qantas AMEX card, but are worried about acceptance, note that the American Express merchant network is growing wider by the day. Chains like Coles, Woolworths, David Jones, Dan Murphy, and Myer plus numerous smaller merchants all happily accept the Qantas Ultimate Card with no surcharge.

You can boost your points haul even further by linking your Qantas Amex Ultimate Card to PayPal, allowing you to use your card wherever PayPal is accepted.

With a Premium membership to Qantas’ food and wine community, you’ll enjoy gourmet food, exceptional wines, and exclusive access to food and wine events around Australia.

Save money with complimentary insurances

When you use your Qantas American Express Ultimate Card, you’ll gain access to a range of complimentary insurances. Depending on your circumstances, one or more of these products could come in handy, when you’re shopping at home or travelling overseas.

The complimentary insurances that you can access through the Card include medical emergency expense cover, travel cancellation cover, baggage/money/documentation cover, transport accident cover, and inconvenience insurance (if your flight is delayed) when you pay for travel with the Card.

It’s important to note that in order to activate the travel insurance products, you’ll need to have paid for your trip using your Qantas American Express Ultimate Card. Insurance details can be found here.

With a range of other valuable benefits on offer, Card Members can obtain even more value. Key perks include:

• Two entries to the American Express Lounge at Sydney International Airport and Melbourne International Airport (temporarily closed) each calendar year
• Access to Apple Pay, Google Pay, and Samsung Pay – use your card with your phone for easier payments
• The ability to arrange up to four additional cards for family members at no charge (the points earned on additional Cards are credited to your account)
• Amex Experiences: think offers and pre-sale tickets to music, theatre, and films, plus exclusive lounges at selected events
• Amex Offers: cashback promotions that reward you when you register and hit a minimum spend threshold at a merchant (e.g., spend $200 and get $50 back at The Iconic)

To apply for the Qantas Amex Ultimate Card, you’ll need to be able to report an annual income of $65,000 or more and have no history of bad debt or payment default.

You must be an Australian citizen or permanent resident or hold a long-term visa. Long term means 12 months or more and does not include a student visa.

To be credited with the 110,000 bonus Qantas points and $200 Back, you must not have held a Card issued directly by American Express Australia in the last 18 months. New Card Members only.

The $450 yearly Qantas Travel Credit, Qantas Club Lounge entries and complimentary insurances help to offset the annual card fee. If you’re able to make use of the features of the Qantas American Express Ultimate Card, the benefits could far outweigh the upfront cost.