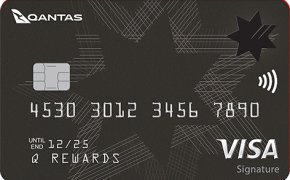 Apply online, be approved, spend $3k on everyday purchases within 60 days of opening your account and keep your card open for over 12 months

Save $100 on the first year annual fee

1 Qantas point for each $1 spent (capped)

To get this offer you must apply online, spend $3,000 on everyday purchases within 60 days of opening your account and keep your card open for over 12 months. Eligibility criteria and T&Cs apply.

You’ll enjoy NAB’s highest Qantas Points earn rate and a range of travel and lifestyle benefits, including a suite of insurances and access to NAB Concierge.

Or, read on to discover why the NAB Qantas Rewards Signature Card could take pride of place in your wallet.

120,000 Qantas Points is enough to get you travelling in style.

Here are some of our favourite redemption options you could seek to lock in with up to 120,000 Qantas Points:

Classic Flight Rewards are subject to airline T&Cs and availability. Taxes, fees, and carrier charges apply in addition to Qantas Points redeemed. Calculated as at April 2022. Please check government restrictions before you travel.

Prefer to use your points on the ground?

For the ultimate ‘on the ground' experience, a luxury rail journey is where it's at. Qantas Points now unlock all-inclusive Gold Service train trips around Australia, providing an exciting way to burn Frequent Flyer points.

Alternatively, spend your points on Classic Car Hire rewards, at the Qantas Store or on a staycation or trip away via Qantas Hotels.

Better still, Qantas Points don’t expire so long as you earn or redeem at least one Qantas Frequent Flyer point every 18 months. So it’s easy to earn now and redeem later.

Supercharge your Qantas Frequent Flyer balance with 1 Qantas point for each $1 spent on everyday purchases everywhere Visa is accepted, up to $5,000. Over this cap, the earn rate is 0.5 Qantas Points per $1 spent up to a maximum spend of $20,000 per statement period.

Qantas enthusiast? Get rewarded with an additional Qantas point per $1 spent when you use your NAB Qantas Rewards Signature Card to pay for selected Qantas products or services, such as flights booked directly through qantas.com, Qantas Contact Centres or selected travel agents and membership to the Qantas Club. Exclusions apply.

The NAB Qantas Rewards Signature Card unlocks complimentary insurances to give you peace of mind, whether you’re shopping at home or travelling.

Unlock a range of lifestyle benefits

The NAB Qantas Rewards Signature Card is packed with a swag of additional benefits that you’d expect from a high-end rewards card. These include:

And, if you’re not yet a member of Qantas Frequent Flyer, you can join for free once you have your NAB Qantas Rewards Signature Card. This equates to a saving of $99.50 as at April 2022.

To be eligible to receive the full 120,000 Qantas Points and a saving of $100 for the first year annual fee, you must apply online, be approved, spend $3,000 on everyday purchases within 60 days of opening your account and keep your card open for over 12 months.

The bonus point offer is not available to existing customers who have received or are entitled to receive bonus points from a personal NAB Qantas Rewards credit card in the last 12 months or those transferring from another NAB credit card account.

The application form takes less than 15 minutes to complete and you’ll receive a response in 60 seconds.

The Champagne Mile may earn a commission when you apply for this Card via a link in this post. Thanks for your support!