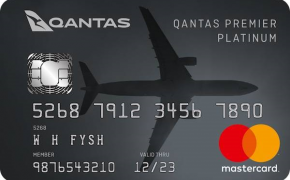 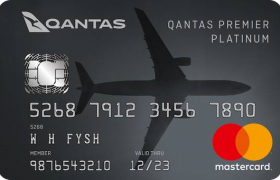 20,000 bonus Qantas Points will be awarded each month when you spend $1,500 or more on eligible purchases per month, for a total of 120,000 points over the first 6 months

For a limited time, collect up to 120,000 bonus Qantas Points with the Qantas Premier Platinum Card. That’s enough points to fly almost anywhere in the world in economy return with Qantas or a partner airline. It’s also enough to book a one way Qantas business class classic reward flight to the USA.

This popular Qantas Money credit card is simply packed with perks, including two Qantas Club lounge invitations each membership year, a reduced first year annual fee of $199 (a saving of $100) and the ability to earn one Qantas Point per dollar spent on eligible spend in Australia, with up to 1.5 Qantas Points per dollar spent overseas.

Am I eligible to receive the 120k bonus Qantas Points?

To be eligible for the bonus points, you must not currently hold, or have held a Qantas Premier Platinum Mastercard in the previous 12 months. To apply for this card, you’ll also need to be 18 years or over and to report an income of at least $35,000 p.a.

To pocket the full 120,000 bonus Qantas Points, new cardholders need to spend $1,500 or more on eligible purchases per month, for a total of 120,000 points over the first 6 months. This offer ends on 26 Feb 2020. Eligibility criteria, spend criteria and T&Cs apply.

Here at The Champagne Mile, we love to use our Qantas Points for business and first class flights, and we aim to extract at least 5 cents value or more from each Qantas Point. However, it goes without saying that everyone’s redemption goals are different, so the value of Qantas Points is subjective.

The fact is, even if we were to apply at a relatively low valuation estimate of 1 cent per point (as published by Choice earlier this year), 120,000 Qantas Points is worth the equivalent $1,200 AUD. When you consider that you’ll pay just a $199 annual fee for the first year, that’s an incredible value proposition.

In real terms, 120,000 Qantas Points is enough to jet off anywhere in the world on the Qantas network, flying Qantas or a partner airline in return economy. You could also redeem selected routes in business class, including a one way flight from Melbourne or Sydney to Los Angeles.

Fees and charges are payable in addition to points redeemed. Qantas Points redemption is subject to airline T&Cs and availability.

Turbocharge your Qantas Points balance with a high earn rate

The Qantas Premier Platinum Card delivers generous Qantas Points earn rates on eligible spend in Australia and overseas with a very high points cap, positioning this Card as one to keep in your wallet for the long term.

Earn rates are as follows:

The Qantas Premier Platinum Card unlocks two Lounge invitations (valid for use at domestic Qantas Club lounges and Qantas International Business Lounges) each membership year. The passes are available after your first Card spend that year on selected Qantas products and services.

The invites are valid at domestic Qantas Club lounges and International Business Lounges (note that the Qantas Los Angeles Lounge is excluded).

‘Selected Qantas products and services’ means paying for Qantas passenger flights that are purchased directly from Qantas, and for Qantas Frequent Flyer and Qantas Club membership joining and annual fees.

Each Qantas Club lounge pass admits one person only. However, you could use your two passes for two people.

Save up to 20% on Qantas companion fares

This is a valuable benefit that could see you save significant money when you next fly with Qantas.

It works like this: Once per calendar year, you can save up to 20% on selected Qantas and QantasLink flights within Australia for you and up to 8 companions.

The discount on offer is between 10% and 20%, depending on fare type, with the savings set out below:

The Qantas Premier Platinum Card unlocks access to a range of complimentary insurances, including emergency medical, cancellations, baggage, delays and more. The insurances on offer are:

Before taking up any of these insurance products, and to find out more information about coverage requirements, you should refer to the terms and conditions to ensure they are right for you.

Get a 0% balance transfer for 18 months

Enjoy a range of other money-saving benefits

The Qantas Premier Platinum Card delivers a range of other valuable benefits. These include:

To apply for the Qantas Premier Platinum Mastercard, you’ll need to be able to report an annual income of $35,000 or more and have no history of bad debt or payment default.

To be eligible to receive the 120,000 bonus Qantas Points, you must not currently hold, or have held a Qantas Premier Platinum Mastercard in the previous 12 months.

With a huge sign on bonus of up to 120,000 Qantas Points and a very high ongoing earn rate on everyday spend, it’s not hard to see why the Qantas Premier Platinum is the card of choice for many Qantas Frequent Flyers.

The discounted first-year annual fee, complimentary Lounge entries and travel insurances serve to sweeten the deal. If you’re able to make use of the features of the Qantas Premier Platinum, it’s fair to say that the benefits could far outweigh the upfront cost.

Don’t miss this opportunity to collect one of the biggest Qantas Points sign on bonuses available.